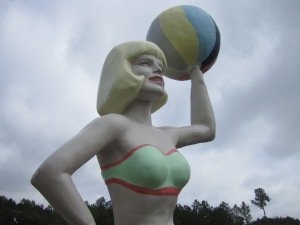 American Giants just wrapped up a two day road trip in North Carolina shooting most of the Muffler Men in that state. It was a great opportunity for me to see some of them for the first time.  I also discovered a new Uniroyal Gal never reported on before, (something I can now cross off my bucket list)

About four months ago, I was prowling the internet for vintage photos and information about these Uniroyal Gal statues.  I stumbled upon a photo at Flickr of one that I had never seen before.  By my count, there are less than 10 of these statues left so finding one is a big deal! Since there are so few of them, I can identify each one immediately in photographs.  So, I knew this one was something new.  I contacted the guy who took the photo back in 2007 and told me that the statue was somewhere between South of the Border and Wilmington, NC. He didn’t remember anything else.  During the following week, I scoured Google satellite images along his most likely route until I finally found her.  I could clearly see not just one but three Uniroyal Gals lying in the grass in the back field! I tracked down the owner and went to meet him and his statues in Bolton, NC as the first stop on this road trip. 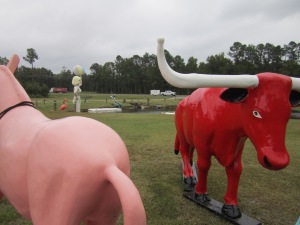 The statues are located at Graham & Dolce Fiberglass which is located on Highway 74 east of Bolton.  It’s hard to miss since there are dozens of fiberglass animals in front of the private residence.  Among the statues is a Uniroyal Gal standing next to a pond, holding a giant beach ball buried past her ankles in the mud.  The owner hopes to open a miniature golf course next year which will showcase the fiberglass animals and

the Uniroyal Gals.  The three Uniroyal Gals were produced from a mold that the owner obtained many years ago near Rocky Mount.  Although the property is not yet open to the public, visitors are welcome to pull over and snap photos. In addition to the dozens of animals, there will be a Boo-Boo Bear and other character statues. I spent four hours filming and will feature this fiberglass collection in an upcoming episode of American Giants and future blog posts.

White’s Tire currently has six locations in the Wilson area. One of the locations in Wilson has an unusual Paul Bunyan model.  While there, I got to speak briefly with Bobby White, the son of the company’s founder. His father bought the statues back in the 1960s from International Fiberglass. He ordered at least two of the 15 foot tall versions and one full-size Paul Bunyan. Unlike the standard arm position, this statue has his right arm

raised and his left arm down at his side like the Indian models.  He also wears the Cowboy model pants. Bobby said that the giant statues remind us of better times and represent good.  He said that many people have tried to buy the statue or have it moved.  However, he believes that the statue belongs at White’s Tire where it has stood for nearly 50 years.

On my way to see the Uniroyal Gal in Rocky Mount I passed another fiberglass business. I pulled over and asked the owner about the Uniroyal Gal that used to stand in town. We know that these days she is hanging out at the private “mens club” as they call it but I was curious what he remembered. He told me that she used to stand at Mosley’s Shady Lake Motel and that he was the one that had made her from a mold. It was

unclear where he got the mold but it seems to be the same mold that eventually fell into the hands of  Graham & Dolce Fiberglass in Bolton. I tried to get a picture of the Uniroyal Gal in Rocky Mount but not wanting to trespass behind the gates and fence my angle was limited. While the Uniroyal Gals in Bolton show some differences in their structure the one in Rocky Mount is harder to distinguish from the originals. She was obviously cast from the mold when it was in better condition. Interestingly both the standing Uniroyal Gals in North Carolina hold beach balls. 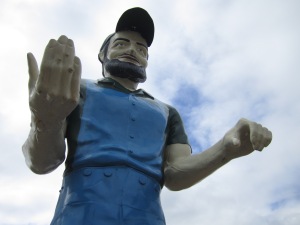 I wrapped up this road trip with a visit to the Muffler Man in Raleigh. He was repainted in 2011 and is still looking sharp.  His knit cap has been modified into a ball cap. The statue’s right foot has been reworked and looks strange.  It was probably run over by one of the construction vehicles driving around on the property. This statue stood in downtown Raleigh in the 1960s.  Since the 1980s, it has been located the outskirts of town.  I got to see eight Muffler Men on this trip – bringing my total sightings to 118!

I want to thank all the Muffler Men owners who took the time to talk to me on this trip as well as a special thank you to those at Graham & Dolce Fiberglass. Also to Debra Jane Seltzer for her input, fact checking and helping me edit this article.