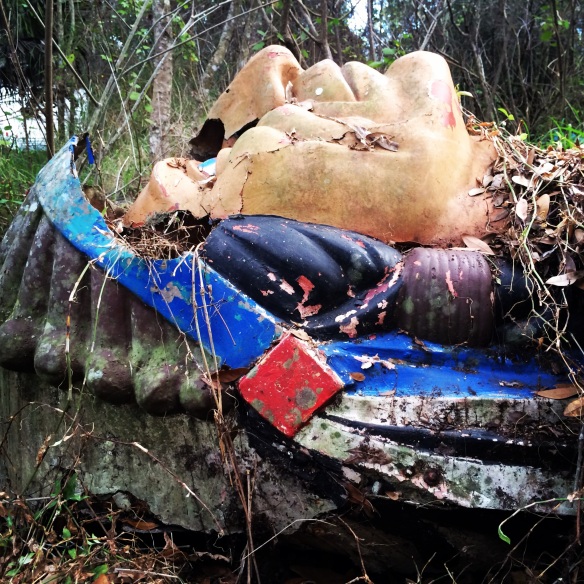 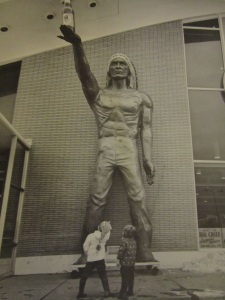 In May 2013, I took on a huge trip to see Muffler Men in Pennsylvania, New York, Michigan, Wisconsin, and Canada.  I saw more than 20 statues and made some interesting discoveries. One of my stops was at the Big Indian Smoke Shop in Irving, NY.  There are two Indian Chief statues there.  One stands next to I-90 while the other is currently in storage awaiting repairs.  According to the owner, one of the statues was originally located at the Iroquois Brewery in Buffalo, NY.  She also explained that there were two other Indian Chiefs in Buffalo.  One of these is now at the Big Indian Smoke Shop and the other went to an unknown location.  I jotted down the information for a future search and forgot about it.

Then a few months ago, Debra Jane Seltzer of RoadsideArchitecture.com sent me a link to a photo at Flickr.com taken in the 1990s of an Indian statue at a Florida campground. This statue was located at the Peace River Campground in Arcadia, FL and was toppled by Hurricane Charley in 2004. After that, it was reported as missing at RoadsideAmerica.com.  I think everyone assumed that it had been trashed and was gone forever. 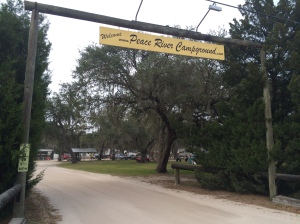 In December 2013, I went to Arcadia in search of the long lost Indian.  At the campground, I met the owner, Johnny Lempenau.  She was surprised that I was looking for the statue and quickly called someone to take me out to where it was being stored.  As we bounced around in the golf cart, I noticed there were ATVs everywhere. The Peace River Campground is the only campground in Florida that allows them.  My driver 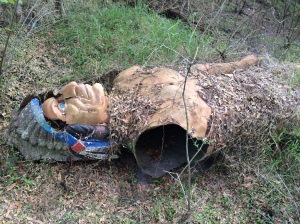 pointed out the intersection where the statue had stood previously.  When the Indian was knocked over and damaged in a storm, it was hauled off to the woods.  The statue has been there for ten years now and is covered and hidden by brush.  The Indian is missing his feet and right arm.  The fingers on his left hand and portions of his face have also been ravaged by time and the elements.  His deep blue eyes stare up at the sky through the trees while the forest grows up around him more each year. 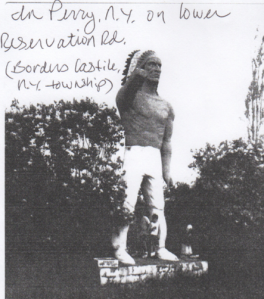 Back at the office, Johnny presented me with a pile of photos and newspaper clippings with information about the statue’s history.  It turns out that this is the third Indian statue from Buffalo.  It was moved from Buffalo to Tonawanda, NY where it stood at an amusement park with other fiberglass figures, including a giant whale.  Then, in the mid-1970s, the statue was relocated to Perry, NY where it stood on a pedestal on Lower Reservation Road.  At some point, the Indian lost his saluting right arm.  The arm reappeared on a telephone pole at a private residence nearby.  The owner of the statue could not persuade the person to give the arm back. 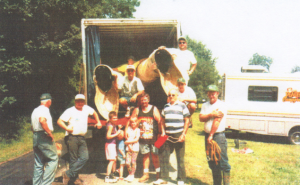 In August of 1995, Johnny’s relatives, who owned the Indian, loaded him into a truck with his feet sticking out the back and drove him down to the campground in Arcadia. Initially, the statue stood in grove of trees next to the office at entrance.  Later, the statue was moved further inside the property. 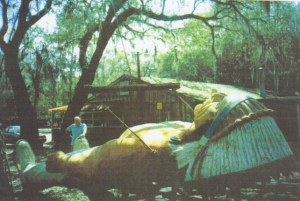 It is unlikely that this Indian will ever stand again.  This is the most damaged and deteriorated Muffler Man that I have seen so far.  However, thanks to Johnny, I was able to get the statue’s history and link him to the other two Indians in upstate New York.  International Fiberglass made many Indian statues in the 1960s.  They were installed at 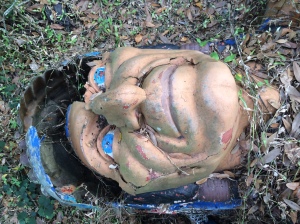 gas stations, car dealerships, and other businesses.  There are about two dozen still standing in the United States.  These statues came in two models.  The bare-chested bodies were the same but they had different headgear.  The Indian Brave wore a single feather in his headband while the Indian Chief had a full headdress.  While the Indian in Arcadia is missing much of his face, his headdress is still mostly intact. Although his condition is poor the camp hopes to one day get him up again.