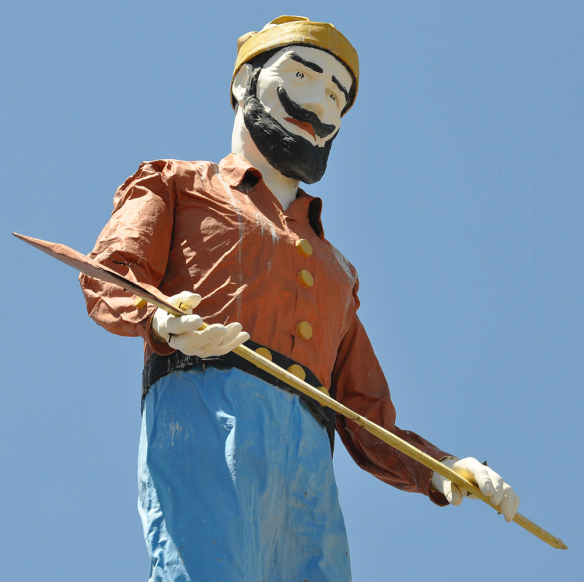 Although the lumberjack statue at the May Café in Albuquerque is not a Muffler Man, many of you may still be interested in this recent news. In January, the statue’s lower arms, hands and axe were blown off during a storm. The restaurant’s owners saved the parts and are waiting for insurance money to make the repairs. They hope to have the statue back to normal by summer. The photo of the statue in its current state appears on the left with permission from the Instagram account of al_manz.

This statue is roughly the same size as the Muffler Man statues and it bears a strong resemblance to them. The statue’s clothing is painted the same colors as International Fiberglass’ standard Paul Bunyan statues. The hand position is basically the same. The May Cafe statue was originally built in the early 1960s for the Duke City Lumber Company. It’s possible that it was modeled after the very first Muffler Man statue which was installed in Flagstaff, AZ in 1962.

When the lumber company closed, the building housed a hardware store. The May Café has been here since at least 2000. Since the statue and the sign below it have been here for more than 50 years, they have “grandfathered” status with the City. The owners simply changed the sign panel below the statue when the restaurant moved in.

In other giant statue news, a Muffler Man in Shelton, WA came out of hiding for Super Bowl Sunday. The statue appeared at a local gas station wearing a football jersey bearing the number 12. The “12” stands for the Seattle Seahawks “12th man”: the fans. The name “Seahawks” was also painted on the blade of the statue’s axe. The photo on the left appears courtesy of josharpalicous’ Instagram account.

The Paul Bunyan statue has been

located in Shelton since the early 1960s. It first stood at the Binger’s gas station next to the old bridge. Lloyd Prouty used to pass the statue on his way to high school every day. Today, he is the proud owner of the statue and has it installed on a trailer with a hydraulic jack. This enables him to easily set up the statue for different events in town. This appearance of the statue may have brought some good luck since the Seahawks trounced the Denver Broncos 43 to 8. 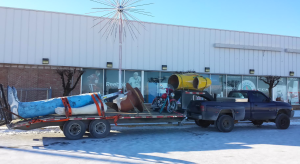 Lastly, the Half Wit statue from Flint, MI is now on its way to sunny California.  In January, Bruce Kennedy purchased the statue.  It will soon join his other Muffler Men statues at Bell Plastics in Hayward, CA.  Bruce already has two Paul Bunyans and a Cowboy.  I’m sure if an Indian or any of the rarer statues becomes available, he’ll be jumping at the chance to add more statues to his collection.  This Half Wit statue was originally located in Kansas City, MO.  It was moved to Flint in the late 1990s.  In the 1980s, while it was in Kansas City, the statue’s shirt was painted in a Hawaiian print.  I don’t know if Bruce plans to keep this design.

Thanks to al_manz and josharpalicous for letting me use their Instagram photos at this website and Bruce Kennedy for the use of his photo. Also thanks to Debra Jane Seltzer for her editing help and research.