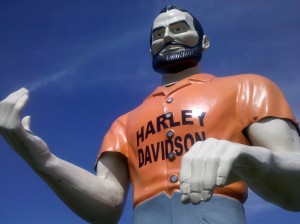 Known today as the Livingston muffler man this guy has had an interesting life and is still holding a few secrets. His roots have been traced back to the state of Kentucky which has never been a popular place for muffler men. Interestingly it has only housed 15ft versions and they don’t seem to originate there or stay there. In 1999 Roadside America received it’s first muffler man tip for Kentucky about a 15 ft muffler man overlooking highway 90 in Monticello. In 2003 Nick Catron the owner must have stumbled upon the website and posted a tip acknowledging ownership and suggested he might turn him into a Jesus Christ (that would be a first).

By 2007 the giant seemed to have vanished with a report coming in of failed attempt by some muffler men spotters. And that is the official end of what is known as the Monticello muffler man. However in 2005 a new muffler man appeared in Somerset, KY and quickly was reported on Roadside America. The guys at RA were immediately suspicious that this was the guy from Monticello but up until this point as far as I know, no one has confirmed the connection. We learned they named him “Hank the muffler man” and for two years reports came in of his movement from the ground to the roof and of a recent paint job. In August of 06 he was up on e-bay and by April of 07 the report came in that he was gone. It would seem at that point the state of Kentucky was muffler manless but we would learn much later that one actually had been residing in Mortons Gap since 95. 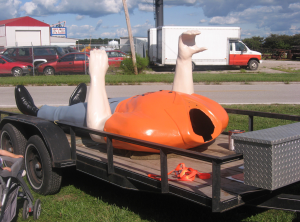 Hank however was on his way to the much more populated state. Illinois currently boasts a total of at least 19 muffler men and if your math doesn’t add up just trust me, of course there possibly could be more. He arrived in Livingston sometime in 2006 and was first reported on RA in November. Initially he was kept painted the way he was and set up inside the large Antique store called the Pink Elephant Antique Mall. At one time it was a school and if you look closely you can still see the stage and realize your standing in the gym. Sometime between then and 2010 he was repainted and moved outside and stood next to the brick wall of the building. “Harley Davidson” was painted across his now orange shirt and whoever restored him did a great job. 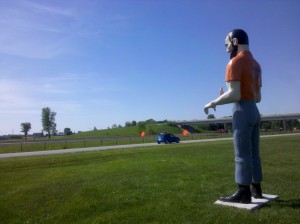 I’ve even seen a picture on

Flicker of his arrival back at the store after getting repainted with his body on the trailer and his head in the passenger seat! In June of 2010 he was relocated to the middle of an adjacent field and today he watches the traffic pass by on the interstate. If your ever in the area be sure and stop by and check out the other large fiberglass figures they have including

an Elephant and what is known as “Beach guy”. I want to thank Roadside America as always for all the information they post on their site and Darren Snow and his “plasticfootball” flicker page for allowing me to share the rare pictures he was able to snap after the muffler man arrived back at the Pink Elephant following repainting and restoration. Thanks Darren!