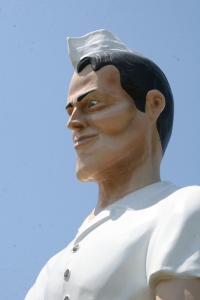 This blog happens to be coming out appropriately right after the release of the first episode of American Giants that covers this soda jerk found in Macon, IL. I have created a slightly confusing situation by referring to this muffler man as both the Macon and Decatur soda jerk. There is only one and he is actually in the small town of Macon which is just south of the much larger town of Decatur. As I mentioned in the episode, he stands in the middle of a field along highway 51 and the business he apparently was ordered for stands empty and unfinished behind him. He has been standing here holding his ice cream for a few years now and it is unknown what will become of him. He is defiantly one of Mark Cline’s creations made from the mold he cast from a 15 ft muffler man. Mark continues to make soda jerks and cowboys, all variations of the original lumberjack from International Fiberglass. This one has one hand down at his side and the other in standard muffler man configuration. The soda jerk found in Derby, NY was made about the same time as this one and is almost an exact copy except that one is holding a burger as well. Check out the blog on Mark Cline for allot more information on him and these soda jerks.