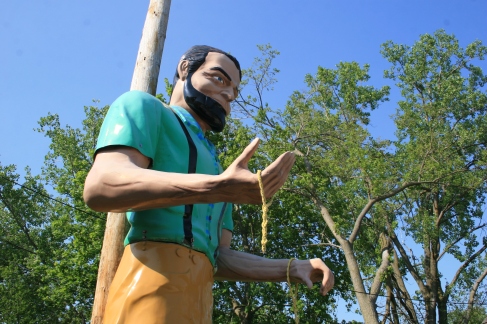 Although claiming to be a Bunyan version, this muffler man in Crystal Lake has been many things but I don’t believe a Bunyan has been one of them. Individual muffler man history can be a beast to piece together and often my blogs reflect my conclusions instead of the

hard facts although my quest is to always get the facts. I visited this gentle footless giant on my first muffler man trip (now showing in AG episodes). He stands with an indian version at the Greenhouse of Crystal Lake Garden Center in Crystal Lake, IL. He has suspender buttons like a bunyan version but appears to not have had the bunyan boots. He’s got suspeners painted on his shirt and a very interesting paint job around his neck line and collar. At first glance he looks like a bunyan in the face but a second look reveals a smooth chin with a painted on beard. So I would classify this one a classic

service man version. His history is a bit hazy but certainly seems to have roots in the Chicago area. He’s stood next to a green house and pallets of garden soil since 2009 when he and the indian arrived here. They were first reported on Roadside America in 1999 when they stood at the now gone Ozzies Waterpark that was located at 20263 Rand Road between Long Grove Road and Lake Cook Road. They stood close to each other and had different paint schemes at the time.  In 2001 Debra Selzter with RoadsideArchitecture stopped by and photographed them and Roadside America also wrote an article about them on their website around the same time. It was also noticed that they were both missing their feet, not a terribly uncommon problem with muffler men. There are actually a few muffler men in the Chicago area missing their feet including these two and the one standing on the roof of Guardian Auto Rebuilders 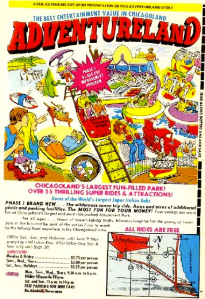 in Evergreen Park, IL. Also a long lost bunyan in southern WI also had cut off feet. All four of these giants have been cut off in the same place and it’s my guess that their feet were originally installed in concrete and were simply cut off when it was time for them to be moved or sold. In 2007 Ozzie’s closed to make way for a Whole Foods supermarket and the giants were reported missing that year before reappearing a few years later at their current location. So far I have not found any hard facts about their travels before Ozzie’s but I have had a few ideas. Way back in the 60’s there was amusement park located in Addison, IL called Adventureland. Today very little of it is left but I have found old pictures of the park at Lisa’s Nostalgia Cafe that show evidence of a pirate and a indian version that stood at the parks entrance. You can even see them displayed on the cover of the parks brochures. In 1977 the place closed it’s doors and the park quickly fell into disrepair but many of the buildings and rides remained for

many years. The giants were removed but their feet remained until around 2005 when the entire area was cleared for new development. I visited the site in 2012 and found old concrete platforms and ride foundations in the woods but the entrance area had all been cleared

and re landscaped and a huge office complex now sits on most of the former amusement park site. Although originally suspecting the two muffler men at the green house in Crystal lake as coming from Adventure Land I still have some doubts. It appears in vintage pictures from the 60’s that the Bunyan (then a pirate) has an actual beard and pictures from the mid 70’s show the feet cut off at the 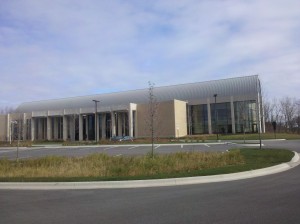 knee’s and not the ankles as they are today. So where did the greenhouse muffler men come from before Ozzies and how did they lose their feet. If they are not the muffler men from Adventure Land then what happened to the Indian and Pirate that once stood at it’s entrance? Another great example of the mysteries of muffler men.

Special thanks to Debra Jane Selzter for the use of her picture showing the service man at Ozzie’s in 2001. For more info on Adventure Land please visit Lisa’s Nostalgia Cafe.