It’s been awhile since I have worked on my progressive list of Muffler Men sightings, so lets pick up again with sighting #67 in upstate NY. The Bunyan Muffler Man at Magic Forest, was the last one I visited at the amusement park. Like the rest of the Muffler Men there, it is hard to say where he came from. While some of them can be traced back to the Danbury Fair, I have had no luck tracing his origins. He is the only Muffler Man located close enough to the fence, that you can get some good pictures if the park happens to be closed or you don’t want to pay for admission but still see a Muffler Man. He is called a Bunyan because of his lumberjack look and axe but 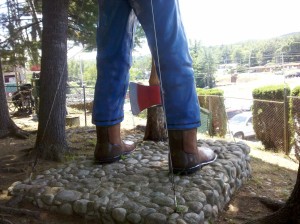 interestingly he does not have a knit cap. He does however have a beard and boots common to the bunyan Muffler Men but also lacking the buttons for suspenders. International Fiberglass often made custom combinations of their Muffler Men, and I am guessing that is what happened here. After a close look at his axe I am guessing that it is original from International Fiberglass and looks to be in great condition. Often the axe was the first item to disappear and many replacements were made to keep the giants from going empty handed.