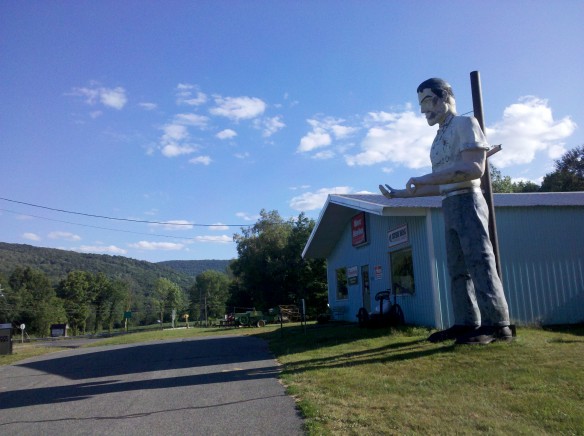 This post is an attempt to continue posting information on my Muffler Man Sightings, picking up where I left off with me #69 sighting back in July 2012. I had been traveling across New York, visiting Muffler Men, and had just left Lake George. I headed east and just after crossing into Massachusetts, I stopped at Green Valley Equipment in the little town of Hancock. This was a special sighting for me, because it is one of the rare bow tie versions. Only a handful of these variants remain today, and other then the bow tie, they look just like the rest.

The Muffler Man is one of golfer versions made by International Fiberglass. We don’t know if he actually ever held a golf club, but he has a golfer’s hat and the same pants and shoes that the golfer versions had. We don’t know who first ordered him, or where he stood, but it is believed he was first shipped to NY or NJ in the late 1960s or early 1070s, shortly before International Fiberglass stopped producing the giants. 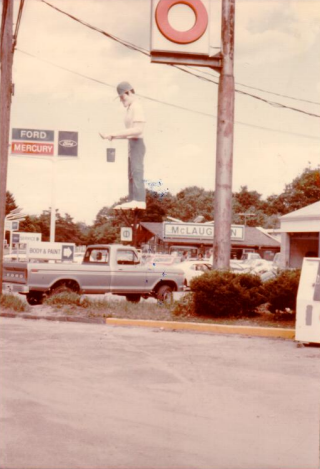 The earliest record I was able to find of him, is a picture of him standing at McLaughlin Ford in New Milford, CT about 80 miles to the south of where he currently stands. The picture was taken in 1977, and he was taken down a few years later and somehow ended up at a nudist camp! We have yet to learn the details of exactly how he ended up at the nudist camp, but he stood there until the early 80s, when a group of teenagers took him to their high school and put him up on the roof as a prank. The police got involved, and he was impounded just like a car would be. After some time in lockup, he was purchased by Donald Whitman around 1984 and hauled up to Donald’s shop in Hancock.

By 1998 Donald decided the giant could use a nice paint job, and hired a sign company to paint him. In 1999 he showed up on Roadside America, looking new and sharp in his Green 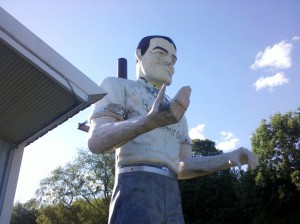 Valley Equipment shirt and cap. Over the next 10 years the weather took its toll, and by the time I arrived he was looking really rough. I had been driving for over an hour and desperately needed to pee, so I trotted up behind the shop. That is exactly when Donald pulled up in his pickup truck, and I was a bit embarrassed as I finished up business and emerged from the bushes. 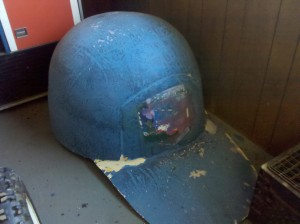 Donald is a kind friendly man, and must have talked to me for almost an hour about the giant and his history, and took me inside to show me the hat that had blown off in 2010. He reminisced about the old days, and a simpler time when the valley was full of farms. The world has changed so much since these giants first started appearing across this country. 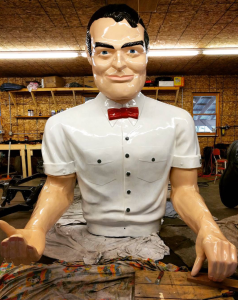 In 2016, I learned that the giant had finally been taken down, for a much needed restoration. A local artist named Melissa Mendes, took on the challenge to save and restore the Muffler Man, and from the pictures we have seen on her Instagram, she is doing an amazing job! I can’t wait to see pictures of the Green Valley Equipment Giant standing once again.

Special thanks to Donald for sharing the history of this giant and Melissa Mendes instagram page melmmmendes, and also to Len Davidson and his amazing collection of old pictures of these giants, that have helped us solve a few mysteries about former locations.