The Muncie M man seems to have called this town home for a very long time. As far back as I have been able to dig he has always been somewhere in Muncie. Obviously he came to Indiana at some point but I wouldn’t be surprised if it was during the 70’s when he was more then likely sold. Earliest sightings placed him on on Broadway Ave at a local car lot and I have seen one rare picture of him at that location.

Sometime before 1997 that lot went out of business and it is likely that he was sold to the guys at  Smith and Sons RV Sales along I-69 because thats where he ended up.  Smith and Sons RV Sales was located off of exit 41 on the west side of the interstate and it was during this time that he was modified to hold things in his hands. Realizing that although muffler men boast rippling muscles and bulging veins their arms aren’t really all that strong the guys at Smith and Sons poked holes in the back of his elbos and ran steel supports down their forearms and out their hands. This steel structure is connected to the large pole behind the giant to hold him up. So in reality the giant isn’t really holding anything with his fiberglass arms but the steel skeleton inside is doing all the work. This is common in muffler men and you can see this in others like the Pahrump big friend in Nevada. In fact the guys at the disposal plant got him because of the large steel structure that was inside him holding him up and planned to recycle it. However once realizing his value they have left him the way he is for now, although some damage was done in the move. 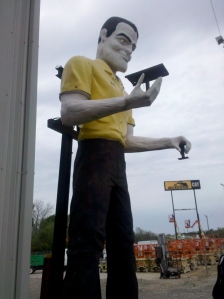 The Muncie muffler man soon received a sign to hold in one hand an a mini RV in the other and appeared this way with his accessories and white shirt until the business was sold and the property purchased by MacAllister Machinery in 2005. At that point the sign and RV disappeared and the giant was left empty handed and has remained that way till today. Around 2007 he received a new paint job and was given black pants and a bright yellow shirt which makes him nice and easy to spot when driving by on the interstate. I have actually visited him twice now on my travels. He appears to be a service man version but it is possible he was a cowboy at one time. I don’t seem to have a close up of the international fiberglass logo in my files which probably means I was not able to find one. He’s got cowboy legs so he should have one, sometimes these logo’s get sanded off when muffler men are restored or repainted. Thanks as always to Roadside America for the information they provide on their website and Debra Jane Seltzer for letting me use her pictures of the muffler man in 2005 when he was still with Smith and Sons RV Sales.