Finally another Indian! This was my third indian sighting and after a bit of cunfusion when first arriving on campus we quickly found the brave overlooking the football field (kind of hard to miss). Today you can find him standing at McEachern high school in Powder Springs and he has been here for at least 35 years I was told by the coach. I’ve heard a few versions of his history and there are some conflicts between Buckhead and Marietta Georgia as his previous location but we do know that he stood at a Pontiac dealership at one of these towns from the late 60’s to the early 70’s before being purchased by the McEachern class of 1973. When they graduated they gave him to the school as a class gift and he as been standing on a tall pole behind the bleachers ever since. 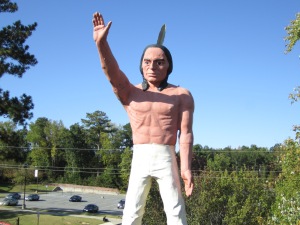 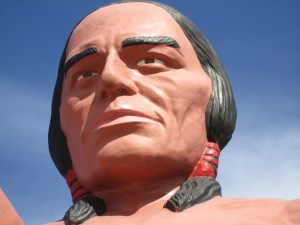 I have studied indian muffler men carefully and they do vary slightly. I believe that International Fiberglass made a few adjustments to their mold as they went along and sometimes you can notice slight differences. Indians came in a few versions and you could get an Indian Brave or a Chief with a full head dress. The one here at Powder Springs sports a single feather and he also lacks the suspender buttons on his pants. As with all Indians his pant legs drop to the top of his shoes and as is common with these full legged pants he has the International Fiberglass logo on his leg above the right knee. Sometimes you have to look carefully for these logo’s because after 40 years and 10 layers of paint they can be hard to spot. Also Indians often have arms that clearly have break or mold points on them where two pieces were bolted together. You can see this on dozens of Indians across America unlike other standard muffler men who do not have a visible joint. Something I also noticed is that the eyes can vary on Indian muffler men. For example this one here in Powder Springs (top) has large big eyes while my #4 sighting in Plainfield, TN (bottom) had smaller eyes like he was half squinting.

One of the sadder Indian stories I have was what was to have been my #61 sighting at the Orange County Fairgrounds in NY (sadly my #61 sighting had to settle for the Elmsford M Man). This is the same Orange County that “Orange County Choppers” is from and a indian muffler man has stood on the fairground for years. I drove by Middletown on the 28th of July but decided I could to see him in a few days since it was getting late in the day. I arrived at the fairground on July 4 2012 only to discover that he had been torn down on the 2nd after standing at his post since the 70’s! I learned a hard and important lesson that day, always visit a muffler man when you have the chance, you never know when he will move on (or in this case, get trashed). It’s true he was in VERY rough shape and he had been patched and repaired so many times that only his head looked muffler man like. His name was Towaco and he stood in the Indian Village area of the fairgrounds. I spent a good part of the afternoon visiting each and every dumpster on the grounds trying to locate the pieces but he was gone. A call to the fairgrounds a few days later informed me that thankfully the head had been rescued from the dumpster and taken home by one of the men that helped take the giant down. I was happy to know that at least somewhere in Middletown an Indian head in very good condition probably graces someone’s garage or storage shed. Thanks to Debra Jane Seltzer for letting me use a picture she took of the Orange County Indian in 2010 before he was taken down. You can read more at http://agilitynut.com/giants/nymm.html