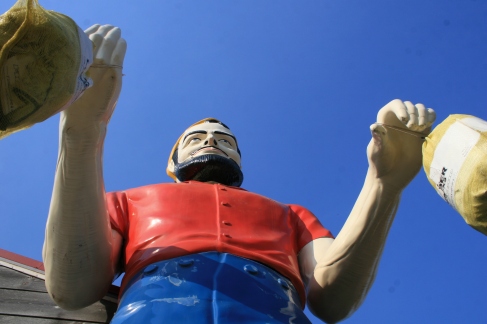 It’s always nice to tie in a missing muffler man with a current one and that is the case with the Crystal Lake Bunyan. He has been standing outside of Lumberjacks Firewood and Mulch business since 2009 when he showed up out of the blue. There was actually some confusion among muffler man spotters as to exactly which muffler man was being seen in Crystal Lake.

In 2007 two other muffler men arrived in Crystal Lake not far away at a greenhouse and at first it seemed the bunyan version had been moved to Lumberjacks. The other two muffler men had arrived from Ozzies Waterpark and they were footless and neither of them was a bunyan version so I ruled that out quickly. Our A.G. crew arrived in the May of 2012 and found the giant holding two big bags of mulch. We were new to the game and it was one of the first giants we started shooting extensively with the go pro

camera. He made a good photo op as he is one of the very classic bunyan versions out there with his yellow knit cap, red shirt and blue pants. Many of the shots we got that day are still used in the episodes and some of them were featured in the open sequence for the series. His history however remained a mystery

to me until much later in the year when I called owner Jack Foss to find out where he got him. I had a hunch that this was the former muffler man that had stood indoors at Wolfs Flee Market and before that in Melrose Park just south of O’Hare at Village Lumber. Jack confirmed my suspicions and seemed happy with

his purchase. Roadside America has a picture of the giant during it’s indoor stint at Wolf’s Flee Market and I was able to get a picture from Jim Hejl that shows the bunyan during his days in Melrose Park. Interestingly Jim not only documented this muffler man but many others during the 1990’s providing a wonderful resource through his website when trying to find previous muffler man history and locations. Jim started photographing himself with larger then life objects and figures in 1991 after coming across a giant skillet in Penn Yan, NY. Since then he has travelled across the country photographing hundreds of unique pieces of roadside architecture as well as muffler men. The Bunyan doesn’t look much different today and we hope he will live in Crystal Lake for many more years to come.

Thank to Jim Hejl and his website for letting us post some of his pictures and to Jack Foss and “Lumberjacks” for clearing up the mystery of his muffler man’s origins. 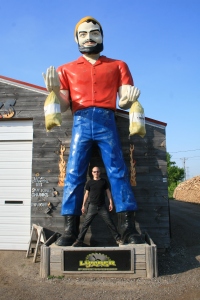