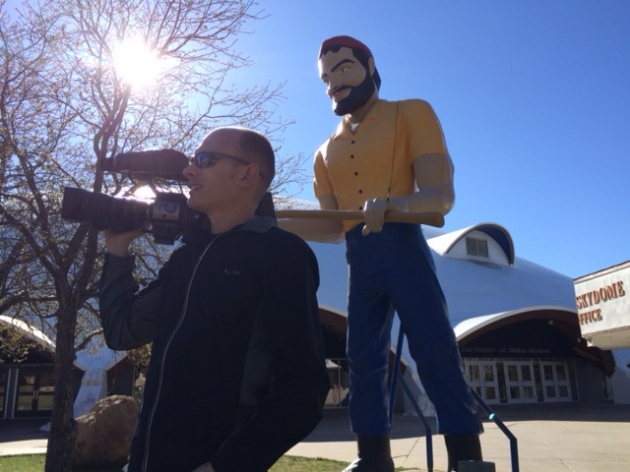 A few months ago, I found out that my job was sending me to a broadcasters’ convention in Las Vegas. I decided that this was a great opportunity to take a Muffler Man road trip. Neto and I made plans to fly first to Phoenix.  From there, we would pick up a one way car rental to San Jose and visit 14 Muffler Men along the way and ending with Bruce Kennedy’s collection of Muffler Men in Hayward. 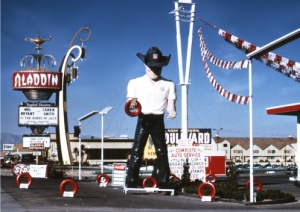 purchased in 1970 and installed in front of Big Johnson Realty.  The statue has been there since then.  When the city changed the level of the street, the statue was kept in place at the original height.  If it had been raised, it would have been in violation of the city’s sign ordinances.  In the summer of 2013, a new business moved into the building next to the statue.  Gamers Trading Post added a few Magic: The Gathering playing cards to the statue’s right hand.

Our next Muffler Man stop was in Flagstaff to see the legendary Louie the Lumberjack. He was one of the first, if not the very first, Muffler Men ever made. Bob Prewitt of Prewitt Fiberglass in Lawndale, CA made the original Muffler Man statue for a customer in Sacramento.  When that deal fell through, he sold the statue to the Lumberjack Cafe on Route 66 in Flagstaff.  The statue was installed around 1964.  Shortly after this, Prewitt sold the lumberjack mold and some animal statue molds to International Fiberglass. In the late 1960s, the owners of the Lumberjack Café ordered a second Muffler Man from International Fiberglass.  The two statues remained at the restaurant until it closed in 1971, they were then donated to Northern Arizona University.  The older of the two statues stands outside Walkup Skydome.  The other statue is installed inside the building in the football field’s end zone.

Upon our arrival we looked the statues over carefully and noticed that they were made very differently. The original is all one piece while the second statue comes apart at the arms, head and waist.  The second statue also has the International Fiberglass stamp on its leg. Both statues have the original axes.  I hopped on top of a roll of football turf inside the dome for a photo to give a size comparison of how big these statues really are. Although it looks small standing in the end zone, Muffler Men are incredibly big.

We loaded up again and continued our trek north stopping in Pahrump, NV to see one of the last remaining Texaco Big Friends. I photographed this statue back in 2011 not realizing that his days were numbered. Sometime after Texaco 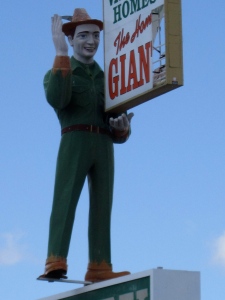 stopped using these statues, this one found its way from Las Vegas area to Pahrump.  Most of these Big Friends were scrapped but this statue was transformed into a green giant. The statue was installed on top of a sign at Valley Homes, a mobile home dealership. Things went well for many years until his owner got in trouble with the law and sadly ended up in prison. When I was there in 2011, I saw that the statue was still in place and in good shape other than a square hole in its back.  In 2012, the sign and statue were removed and carted off to the dump in an effort to clean up the town I suppose.  The

statue’s sudden disappearance sparked interest in its history and what had become of it.  Journalists from the local newspapers discovered and published information about these statues which they found at RoadsideAmerica.com and my blog. The Pahrump Landfill started getting phone calls, including a few from me, about the statue and started to realize this was no ordinary statue.  Although

the giant was badly damaged during its removal, the manager decided to hang onto it and for that he should have Muffler Man named after him or something.  Eventually he passed the statue on to the Pahrump Valley Museum for future restoration.  When Neto and I arrived we were told that the statue was still in storage but we got to take some photos of it.  The museum would like to restore the statue at some point which will require some effort and money due to it’s poor condition.  One of the statue’s arms and one of the hands has been ripped off.  The statue’s torso is torn in half.  The legs have also been detached and a shoe is missing.  Maybe one day, this statue will reappear as either a Texaco Big Friend or as the Valley Homes Giant once more. 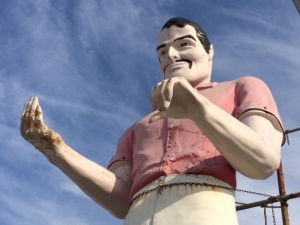 Our next stop Muffler Man stop was more than 400 miles away in Merced, CA.  There, we saw a Service Man model that has seen better days. The Agriculture Museum next to the statue appears to have been closed for a while.  We then moved on to San Jose to see Babe the Muffler Man.  This statue was installed at Babe’s Muffler and Brake in the 1960s.  It

was one of three identical statues purchased for this local chain of San Jose auto repair shops.  One of the statues was burned down in the early 1990s by a local gang. The other statue was removed because of a local sign ordinance. The torso, head and arms were attached to the roof of a car which was driven around town to advertise for the three shops until it fell into disrepair.

After San Jose, we headed to Hayward to see Bruce Kennedy’s collection of Muffler Men.  I’ll cover that stop in the next blog post.

I want to thank all the people along the way who took the time to talk to us and share their stories and history on the giants. Also special thanks to the Pahrump Museum for allowing us to go see the giant off site. Thanks to Debra Jane Seltzer for her help in editing.