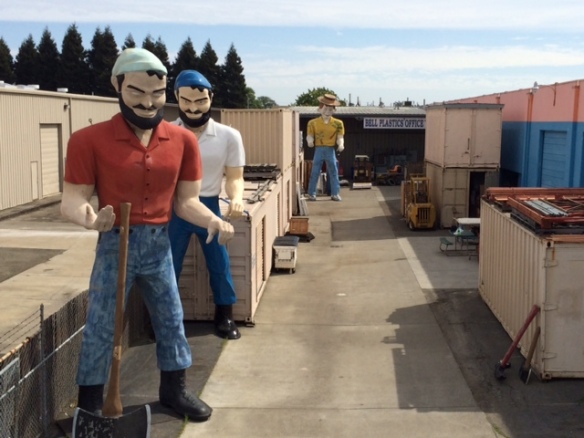 The high point of our West Coast trip was our stop in Hayward, CA at Bell Plastics.  The company’s owner, Bruce Kennedy, has been collecting Muffler Men for a few years now.  His first statue was “Big Mike,” a Muffler Man which has been in Hayward for a very long time. The statue was installed in the 1960’s on Mission Boulevard at the Morris Car Wash. Big Mike held a giant scrub brush at that location. When the Tyre Treads tire store moved in the building, the statue’s scrub brush was replaced with a muffler. The tire store closed in 2010 and the following year, Kennedy bough the statue and moved it to a temporary location. The public found out where it was stored and Kennedy had to hide the statue until the restoration was complete. When Big Mike was restored and delivered to Bell Plastics, he received a big welcome which included press coverage. Shortly after the statue was installed at its new home, Kennedy came in to work one morning and discovered a brand new axe wrapped in paper.  A note was attached to the axe that read “For Big Mike.”  Since the axe is a little too big to fit the statue’s hands, it is displayed in the company’s office.

After restoring Big Mike, Kennedy was bitten by the Muffler Man bug.  He began prowling the internet for more of them.   He particularly wanted a Cowboy statue. He finally found one for sale in Kansas City, KS. This was one of the last Muffler Men statues made by International Fiberglass.  It was located at a gas station in Boonville, MO from at least 1972 until the late 1990s. It may have been originally installed at a Phillips 66 gas station but I haven’t found any evidence of this. During this time, the cowboy’s hat bore the letters “MU” indicating his support for the University of Missouri.

In 2000, the statue was sold at auction to David Disney for $9,800.  He planned to donate the statue to the Kansas City Children’s Museum.  That never happened and the statue languished in storage for 13 years until it was sold to Kennedy in 2013.  The statue was in bad shape when it arrived in Hayward.  However, it was completely restored and installed in front of Bell Plastics just a few months later.  The statue’s face has uncharacteristic airbrushed details.  Kennedy calls this statue “Big Don.” 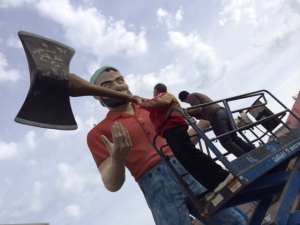 Next, Kennedy acquired a Paul Bunyan style Muffler Man from Paramount, CA.  This statue is painted in the original colors with a red shirt and blue pants.  There is some damage to the statue’s shoulder and back which Kennedy plans to repair.  The statue came with a steel platform, as well as an axe and pickaxe. Kennedy has not restored this statue yet but it stands of the lot at Bell Plastics and goes by the name of “Fix-it”.

Kennedy’s goal is to have one of each Muffler Man model.  Since he already had a Cowboy and two Paul Bunyans, he was thrilled to find a Half Wit model in Flint, MI for sale on eBay.  This statue was originally installed in the mid-1960s at the Poor Boy’s Pantry in Kansas City, MO.  In the early 1980s, it was repainted and given a Hawaiian shirt.  In 1997, the statue was purchased by Bob Perani and installed in Flint at the Dort Mall which he owned.  Kennedy bought the statue from the Perani family and plans to restore the statue.  He will restore it with the Hawaiian shirt paint job.  Kennedy has named the statue “Hollywood” since it briefly appeared in the 2008 movie “Semi Pro.”

My friend Neto and I spent six hours at Bell Plastics getting the histories of each statue from Kennedy.  He also allowed me to use his scissor lift to get close-up shots for my “American Giants” videos.  I plan to launch the second season of the series with footage of Kennedy’s collection.  We had a great time there and I can’t thank Bruce Kennedy enough for playing host and letting us document these statues.

Special thanks to Debra Jane Seltzer for her editing help with this article. RoadsideArchitecture.com