It seems that Muffler Men have been on the move recently, and sometimes its hard to keep track of them as they migrate around America. Some Muffler Men have remained virtually unmoved since being shipped 50 years ago from International Fiberglass, while others have been moved so many times, no one knows for sure where they started out. It seems 2015 and early 2016, saw more movement then normal and at least 10 muffler men were either sold or moved.

One of the most sought after Muffler Men is the rare Uniroyal Gal made for the Uniroyal Tire Company in 1966. Over 20 of these giant ladies made rounds across the country that year, advertising at auto repair shops and tire centers. Today around 13 remain and it isn’t very often that one comes up for sale. 2015 saw not one but two Uniroyal Gals up for sale. Roadside America mentioned that one stood in Chinqoteague VA

back in the 90s but no one was every able to verify the tip. Thats because some farmers from Kingsville Maryland who were trying to buy the viking in town and bought her instead. She has been secretly living in Kingsville Maryland for the last 20 years off the charts. Her owners found our website this year and posted that they were interested in selling and she was

sold within a day or two. She is currently undergoing a full restoration and will appear this spring in Illinois. The other sale of a Uniroyal Gal was to Bruce Kennedy in Hayward CA. He purchased the Uniroyal in Mt Vernon IL that had stood at Stan the Tire Man’s since the late 60s. American Giants was actually able to help take her down and prepare her for shipping to California.

A bunch of the male Muffler Men were also sold in 2015 and our website was responsible for a handful of those sales. We always try to post Muffler Men when they come up for sale. That part of our website has been helpful to those 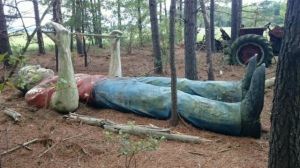 looking to purchase one of their own. Our for sale page was responsible for the El Monte, CA Muffler Man finding a new home at Four Way Muffler in Gallatin TN as well as a long lost Muffler Man being rescued from the woods of South Carolina and being moved to Grove, OK.

Other Muffler Men sold and moved in 2015 include the Havre De Grace MD army guy. We don’t know who bought him or where he is headed but we do know that he was taken down on Dec 2 and hauled away on a trailer. BigGeorge who used to stand in Warrenton TX at the Sterling McCall Old Car Museum until he fell over in 2010, was also sold recently to VintageRoadside of Portland OR, and has just arrived there after the long haul from Texas.

Vintage Roadside also purchased a bunyan Muffler Man head earlier in the year from a seller in Brimfield, NJ. Lake of the Ozarks MO also saw some big changes recently when the Indian was taken down. Thankfully he wasn’t moved far and his new owners plan to have him restored and set back up nearby. The halfwit that once stood across the street is also being restored and will be set up again hopefully sometime in 2016. The half wit was purchased before the indian and stood at Dogpatch in front of Mortimer Snerd Golf. 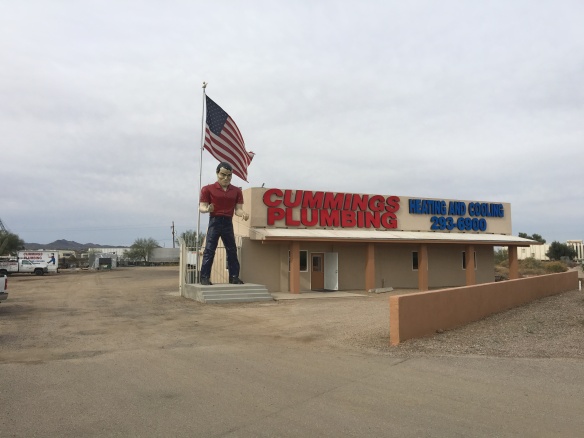 American Giants was also happy to be of help to Kevin Cummings, president of Cummings Plumbing Heating and Cooling, by advertising the auction of the Muffler Man in Rapid City South Dakota. He won the auction for the miner/cowboy and waisted no time in moving him to his business in Tucson, AZ. Kevin first learned about Muffler Men by watching American Giants episodes on youtube and realized he really wanted to own one of the giants. He kept checking our for sale section until the auction popped up and won the bid a few months later. Although the Muffler Man looked almost brand new in the pictures, Kevin told us that he actually needed a full restoration to fix the many cracks and paint job. He was fully restored and set up dressed as Santa, just in time for Christmas alongside interstate 10 in Tucson. Kevin displays his cowboy with the University of Arizona logo on his hat, the Muffler Man is Arizonans biggest fan.

Special thanks to Kevin, Vintage Roadside and others, for the use of their pictures displayed here.