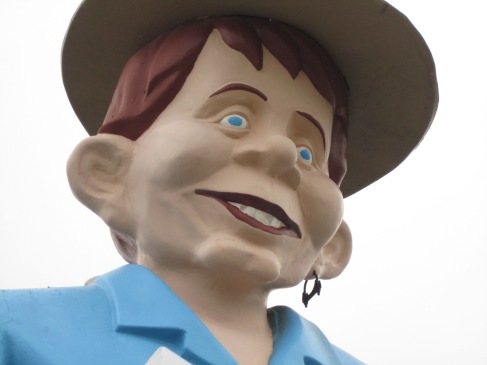 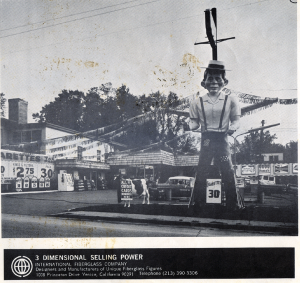 The half wit is an interesting part of the muffler man story. He wasn’t the first variant made as I believe the indian came before but he was one of the options you could chose from when purchasing a muffler man. In all, there was a regular service man that was pretty much just the basic muffler man head and body, sometimes coming with a beard or a bow tie but normally clean shaven. Also the cowboy made mostly for Phillips 66 gas stations and the Indian, some of the first being made for the mohawk gas stations. There was the Texaco Big friend and Uniroyal Gal both made exclusive for the Texaco and Uniroyal companies respectively. And then what we call today the Happy Half Wit. Most of the terms we use today to describe muffler men were actually coined by 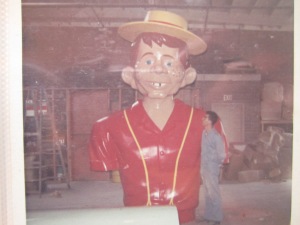 A Half Wit in Production at International Fiberglass Photo: Terry Nelson

Roadside America when they started seeing these guys over and over again on their travels across the country back in the early 90’s and even before. They came up with the name muffler man since many of the giants they saw held big mufflers. I believe “Half Wit” was another name they came up with for the Alfred Neumann looking model but International Fiberglass referred to it as the “mortimer snerd”. The early ones were made for mini golf courses up the east coast and in Ohio and many of the half wits left today are still in these areas. The other cluster is located in Dallas texas after Ken Johnson decided to go with the half wit model to 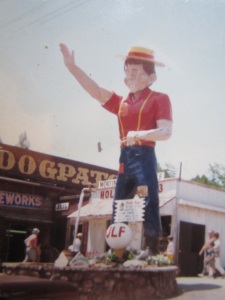 advertise his muffler shops back in the 60’s. The only other state I can think of that has one is Missouri and he can be found at Lake of the Ozark’s in the central part of the state. He is unique in that he is the only half wit I know of that has a raised right hand like the indian versions do. From what I have gathered the half wits came in two paint schemes, one was the yellow shirt with suspenders and blue pants with patches on it and the other was a red shirt and yellow suspenders with blue pants and no patches. Most of the half wits out there today still tend closely to these schemes. When talking to Ken Johnson of Ken’s mufflers in Dallas he told me that all his half wits had yellow shirts and suspenders until he ordered the one that now stands in Beaumont. That one came off the truck in a red shirt and didn’t match the rest he said. I also have noticed two different hat styles came with these half wits. The far more common of the two is the standard round farmer looking hat but there are two half wits that I know of that have the far more rare conductor looking hat. The conductor hat was made by simply cutting and modifying the round one. These conductor hat versions stand at Seaside Heights, NJ just off the pier and the other stood for many years at the Wagon Wheel Inn in North Madison, OH. The picture below is the one standing in NJ, wearing the red shirt and conductor hat. (Thanks to Debra Jane Seltzer for sharing the picture www.RoadsideArchitecture.com ) 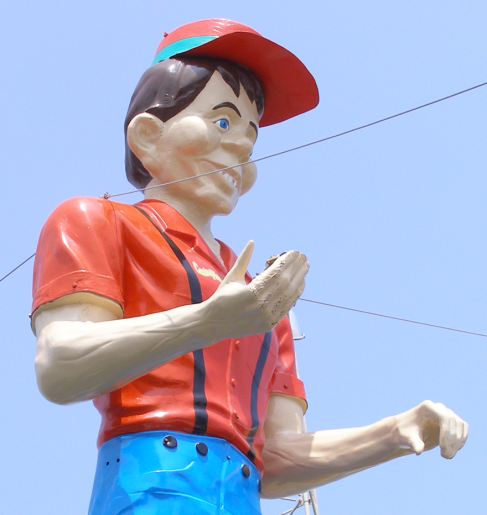 Another interesting fact about Half Wits are their neck sizes! This is something Roadside America picked up on and mentioned in some of their posts. Most have the standard neck size but a few have hardly a neck at all and their heads are jammed down on their shoulders. These neckless versions are far more rare and I believe the one in MO is that way as well as one that used to stand on the pier at Seaside Heights, NJ. Seaside Heights is a story in itself for muffler men and it’s pier has been known for many years now to house a few. At one time a Bunyan stood here along with two half wits. However the Bunyan was knocked down in a bad storm around 2003 and pictures of it in pieces bounced around on the web for awhile until it disappeared altogether. The short neck half wit also disappeared around the same time but after looking closely at a google satellite image I noticed he was still there laying on his back on the pier staring up at the satellite. 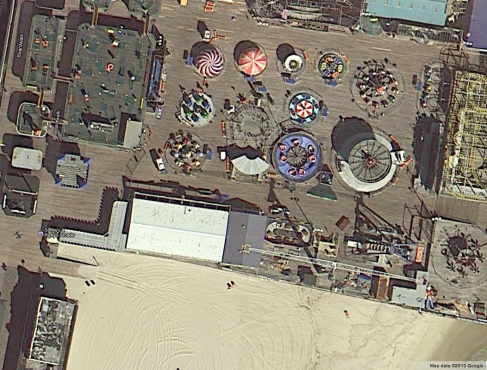 You can see the half wit on his back in the lower right hand corner of the picture. This is exactly where he was when Hurricane Sandy hit in late 2012 and after closely looking at news footage after the disaster I saw that the pier had broken away just east of his position and he seemed to still be in one piece in the same spot. Also his brother half wit standing a few hundred feet to the west on top of a building also seemed to have survived the storm (seen in the picture above). Sadly the Half Wit is the rarest of the muffler men (other then the big friend) but thankfully there are still over 10 in the US that can be seen and visited today.