As the Bunyan muffler men began to become popular and more and more businesses across the US started purchasing them International Fiberglass kept on innovating. They first started with the oil giants, Phillips 66, Sinclair and Texaco making versions of muffler men or dinosaurs that could stand that their gas stations and promote their products and business.

The idea was a success and the reason there are so many muffler men left today is because most of them were made in mass quantity for oil companies, chiefly Phillips 66. Their cowboys still cover large portions of the US with and without their cowboy hats. The texaco big friend sadly is a different story and Texaco was largely successful in destroying almost all 300 that were purchased except for 4 or 5 of them.   Shortly after Texaco purchased their 300 in 1966 the Uniroyal company also wanted a statue to advertise their tires. So International Fiberglass came up with the idea to do something different and make a female version of the muffler man. She was sculpted by an unknown artist who supposedly had a thing for Jackie Kennedy and 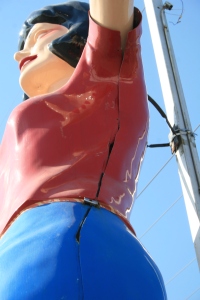 sported an orange bikini. I’m not sure how many were made but altogether I have heard of 17 of them so far and 12 of those are still visible today. Needless to say these are one of the less common muffler men and new sightings almost never happen. International Fiberglass also made a skirt and shirt for the giant lady and these could be put on or taken off at the owners will. The Uniroyal girl in Peoria, IL is changed seasonally and during the winter she wears her clothes and during the hot summer she sports a red bikini. In Gainsville Texas owner Glen Goode even made the skirt of his Uniroyal girl longer so she could be “more holy” as he put it and in WV the Farnham’s Uniroyal girl now sports her newly painted bikini while her clothes lay in the grass nearby. The Uniroyal girl

was originally made to stand outside gas stations and automotive repair stores that sold Uniroyal products. Like other muffler men owned by large corporations she was used in promotions and was moved from location to location by the sales reps. She stood on the same platform that the rest of the traveling muffler men and big friends did and you can still see one today under the Peoria, IL Uniroyal gal. I have been asked many time what she was originally made to hold in that raised arm. If you look closely at Glen Goode’s girl you can see a bracket inside her hand used to hold a pole or flag. I was told the Uniroyal Girl in Bradenton, FL once held an oil can back in the 70’s and the one in Blackfoot, ID used to hold a plate of food. However “she held tires” is the answer I am most often 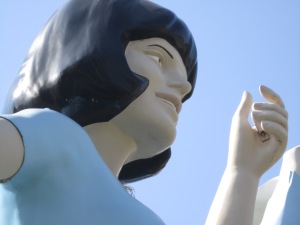 given and this would make sense since she was made to advertise them. Sometime in the early 70’s the Uniroyal promotion reached it’s end and in most cases the sales reps simply left the giants wherever they happened to be and so they went in most cases to the owners of the gas stations or repair shops. That is exactly how the Uniroyal Girl in Mt Vernon, IL ended up in the area and for her it was the end of the road. In

other cases they kept on being sold and moved, interestingly Glen Goode found his in Wichita Falls and the one now in WV once lived in Mississippi at a fireworks stand. There are many interesting stories about these girls, ranging from angry locals upset over her lack of clothing to roomers that the girl in Bradenton once stood on Gasoline Ally at the Indi 500! I also know one once stood at the The St. James Infirmary bar in Mountain View, CA until 1998 when the place burned down along with the Uniroyal Girl inside. There are a few that have fallen off the charts and seem to be gone for good including the girl that used to stand in Ocoee, FL, Del Rio, TX and Chincoteague, VA. As always muffler men or muffler ladies in this case always keep most of their secrets to themselves and who knows how many more gals are out there and where they might be.