The Pioneer statue is technically not a Muffler Man.  When RoadsideAmerica.com began documenting these giant roadside statues in 1996, the name “Muffler Man” was born.  It was used to describe the Paul Bunyan type statues and their look-alikes that we would later learn were produced by International Fiberglass.  RoadsideAmerica began producing t-shirts showing the four different types:  Cowboy, Indian, Bunyan and Half-Wit.  The bodies for these statues were all spin-offs of the original Paul Bunyan model.  International Fiberglass marketed these statues as Cowboys, Indians Braves, Indian Chiefs, Golfers, Astronauts, Mortimer Snerds, and other names.

We now know that the Pioneer statue was also originally produced by International Fiberglass.  However, the mold for these statues was entirely different from the Muffler Man variations.  The statues were developed in 1968 for the Wagon Ho! restaurant chain.  Early on the owners of the chain decided they wanted to visually catch peoples attention and turned to companies like Orion and International Fiberglass to make this possible.  Don Williams owner of Orion was a designer of air supported and inflatable fabric coverings and he designed and built the huge covered wagon canopies that covered the 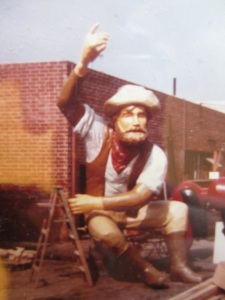 restaurant. International Fiberglass was hired to design and fabricate the giant teamster that would sit on the edge of the building in front of the canopy and drive the imaginary ox or horse team.  These seated statues are 15 feet tall and Wagon Ho! called them “Wagon Masters”.  The Pioneer’s hand positions suggest that the statue held reins or a whip but he never did.

The company opened its first location in Birmingham, AL in 1968 and moved its headquarters to St. Petersburg, FL later that year.  There were plans to build 51 restaurants by mid-1969 and another 200 units by the end of 1970.  Wagon Ho! even sold franchising rights to someone in Canada.  However, the company soon ran into financial trouble and had

folded by 1970.  There were only about five locations built in Florida, the one in Birmingham, and a few others in the Vancouver, BC area.  The location in Birmingham retained the covered wagon building and statue and operated for a few years as a Kelley’s Hamburgers and later as Dilly’s Deli.  However, none of the buildings still exist in a recognizable form.  Only two of the statues are known to have survived.  The Birmingham statue now sits in front of a construction company in Moody, AL.  The other statue was originally located in South Pasadena, FL.  It is now installed at a used car lot in Pinellas Park, FL.

At some point, standing versions of these statues began appearing in North Carolina.  At Debra Jane Seltzer’s website RoadsideArchitecture.com, she concludes that Unique Fiberglass Figures either copied the seated statues or acquired a mold and added a different, standing lower torso. I am inclined to agree with her since I have not found any evidence that International Fiberglass produced these standing statues. There are six of these standing statues known to exist:  five in North Carolina and one in Tennessee.