The Bakersfield Indian was my second indian sighting and he has unique history (as many do). The first thing you notice about him is how dark his skin is. Other then the Muffler Man in Helper, UT this is one of the darkest skinned muffler men out there and I’m not sure who picked out the skin color but I think it’s a bit on the dark side even for an Indian. However he is in great shape considering his rough history. At his feet is a stone plaque that tells his history, something I wish more muffler men had, perhaps not as elaborate but something to tell us of their history. The M Man in Atlanta, IL has a nice board in front of him with his history and pictures and inside the Plantation Hotel in Chicopee, MA there is a plaque on the wall stating it’s history so fromg time to time you do find out the history without having to ask or dig through Roadsideamerica.com but then again, digging is most of the fun!

The stone at his feet tells the story of how he once stood in town in the middle of a roundabout where the town enjoyed him. He was taken down and moved to the High school to be the mascot for the Warriors. However due to regulations and new rules he was taken down and stored in an empty lot where he suffered some vandalism and ended up by 1990 in really rough shape. He was found and restored by a cowboy who eventually had him set up at his current location. He is a bit hard to get to with the interesting highway system in the area but well worth the effort. 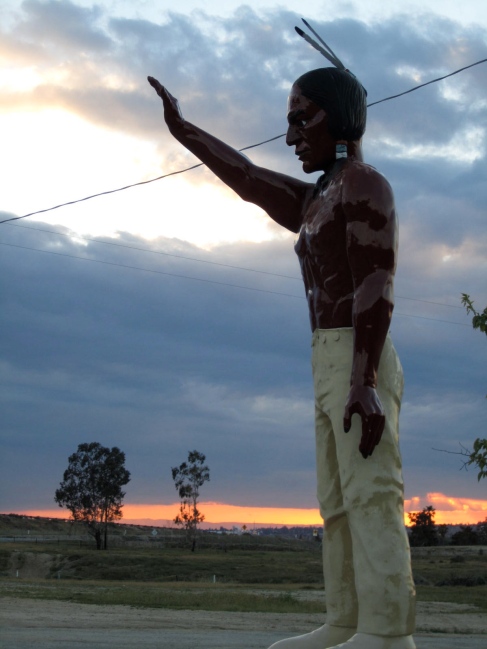