My #30 sighting landed me in the St Louis area which has a few muffler men in the surrounding area. There used to be a Bunyan south down I-44 in Sullivan and a bunyan also stood downtown at a tire shop at one point. Today that bunyan is to the west of St Louis and there also is the shorter m man version up along old route 66 in Livingston, not to far away. 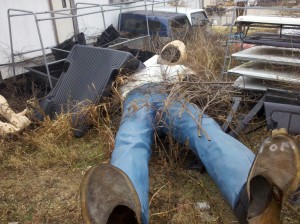 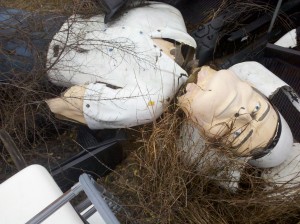 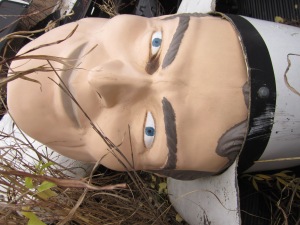 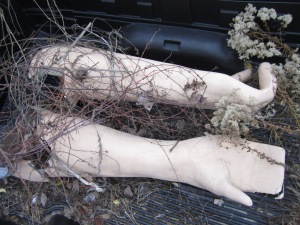 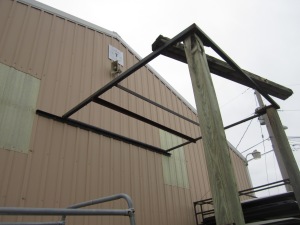 This cowboy is located at Croft Trailer just south of St Louis off I-44 and used to be visible from the interstate. His history is a bit hazy but I do know before arriving at his current location he stood at a used car lot across the border in Illinois at a gas station in Belleville. Trying to find a picture of him there has proved impossible and at this point I haven’t even been able to find out the name of it or where it was located. In the late 90’s he was purchased by the guys at croft and moved to their business. Sadly this guy is a bit unsteady on his feet and he has had a few falls since his move. The first one happened sometime around 2005 and left him with smashed fingers on his right hand. So the guys at croft patched him up and mended his hand and set him back up on his platform which is attached to the edge of the roof of one of their workshops. All was well until 2009 when another storm came along and this time he ended up in pieces. His head broke off and both of his arms and today he lays pretty much where he fell over 3 years ago. The folks at croft are a busy bunch of guys so repairing the cowboy and getting him back up has taken much longer then expected although it’s still in the plans. People have offered to buy him the way he sits (or lays) but the owners are firm on keeping him and will get him up again one day. This is true with almost all muffler men owners, they don’t let their m men go easily. Muffler men rarely appear on e-bay and if one would want to own an m-man it’s not an easy task to get your hands on one. Today this one is mostly forgotten and hard to see with all the weeds and storage equipment surrounding him. He lays on his back with his head tilted at an odd angle from the body and his cowboy hat is partly smashed with pieces of it scattered around. The arms lay in a truck bed liner and the rest of him is stretched out in the weeds waiting to be remembered and one day restored. I also found the name “Tom” spray painted on the inside of his left foot, as I often say these guys have their secrets. Special thanks to Debra Jane Seltzer for the picture of the cowboy when he stood on his platform overlooking I-44 back in the day. http://www.agilitynut.com/giants/momm.html  If your interested in Roadside America’s reports on this guy he is listed under Valley Park Muffler Man.