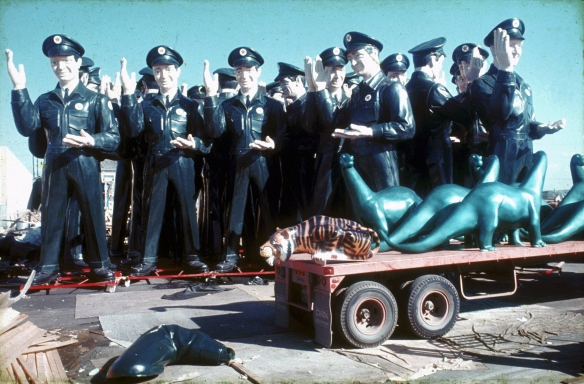 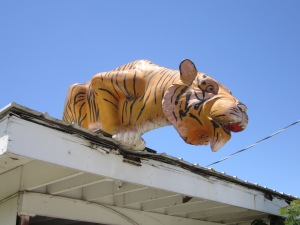 Due to the popularity of this article it has been re edited and reposted.

One of the most interesting side stories of Muffler Men is what is now known as the Texaco Big Friend. Around 1965, large oil giants like Phillips 66, Sinclair, Exxon and Texaco started taking notice of International Fiberglass’s statues in Venice, CA. All four oil companies would eventually work out contracts with I.F. and soon the green dinosaur, Phillips 66 cowboy and Esso Tiger started appearing at gas stations across the country. I’m not sure in what order they were built but the least known and seen would turn out to be the Texaco Big Friend or Friendly Service Man. 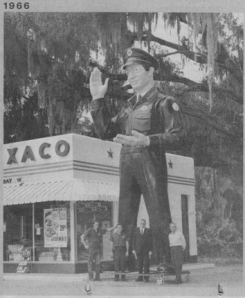 International Fiberglass hired artist and sculptor, Sacha Schnittman, to make the first Big Friend and Texaco ordered 300 of them with an option to buy more. They began distributing them in 1966 at Texaco stations around the country to run along side the televised add campaign but it was short-lived.  Because of the distraction these giants posed to drivers and for whatever other reasons, Texaco discontinued the promotion and the Big Friends already installed at gas stations were taken down and destroyed. It must have been soon after the first ones were erected because the Texaco Big Friend has been the hardest thing to find information about or evidence of online. There are only three vintage photos that I have been able to find.  The first photo above shows Big Friends at International Fiberglass’ lot awaiting shipment to gas stations. The second photo appeared in an Ocala, FL newspaper in 1966 showing the sales reps and workers standing at it’s base. And a third shows one of the giants standing at a Texaco station in Lemon Grove, CA the same year. 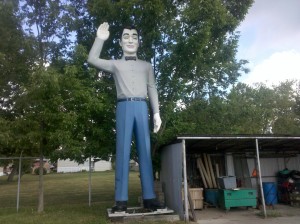 Many people confuse the Texaco Big Friend with a Waving Giant also created by International Fiberglass.  However, by comparing them, it’s clear that they came from two different molds. The lines and creases of their clothing do not match. The Big Friend also has different shoes then the waving giant. The big friend cracks a smile and you can see his teeth. The other statue has a closed mouth. Glenn Goode in Gainesville, TX has another one of these statues. However, he stuck a standard Muffler Man head on his. There is another example of this version in Chicopee, MA at the Plantation Inn.

Texaco Big Friends are the rarest breed of Muffler Men.  There are only two other examples known to exist:  one in Oregon and another in Idaho. Both of these are missing original parts . The big friend in Oregon had his head replaced years ago with that of a Rabbits and the one in Idaho has no feet. In the 1990′s, there was one in Clarksville, AR.  However, that statue has been missing since 1998. (The Clarksville statue was found in Dec, 2015) 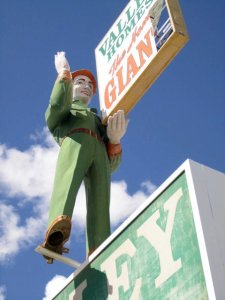 Until recently, one of these statues stood on top of the sign at Valley Homes in Pahrump, NV. It had been there for 20 years. The statue originally stood on the Boulder Highway in Las Vegas.  After changing hands a few times, it was moved to Pahrump in the early 1990s. On December 12, 2013, the statue was taken down when the property was put up for sale.  Sadly, it was hauled off to the dump.  The people who removed it did not realize its historical value. Thankfully, before he was destroyed the guys at the dump stuck him in a container. The statue is currently in storage at the Pahrump Valley Museum. Although the Pahrump Big Friend was damaged when it was removed, perhaps one day it can be restored to what he once was.

I want to thank Roadside America for all the information they have provided on their site about Big Friends and for their interview with the former owner of International Fiberglass, Steve Dashew.  For more information check out the article Roadside America posted a few years ago. Also special thanks to Debra Jane Seltzer for helping me re edit this article.

1 thought on “The Story of the Texaco Big Friend”