North Platte, the county seat of Lincoln County is the home to about 24,000 and happens to be the home to Bailey Yard, one of Union Pacific’s large railroad yards. It also has some interesting museums and history but my attention was centered on an attraction just off of the interstate, Fort Cody. In 1963 the Henline family opened the first Fort Cody on the western end of North Platte on highway 30 and it stood until 1968 when it was moved to it’s present location along I-80. It was moved to coincide with the new interstate being put in and has been drawing travelers off the road ever since. It is now in second generation ownership and is known for it’s old western museum, Buffalo Bills wild west miniature show, large gift shop and fort and stockade, and of course a muffler man. As far as muffler men go this is one of the stars or famous one’s out there. Hundreds of visitors each year stand next to him in the stockade behind the fort for their picture, so he is no stranger to Facebook, flicker and google image searches. 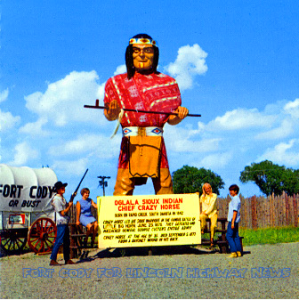 I was fortunate to visit on a day when owner Chuck Henline was in and was able to visit with him a bit and talk about the his muffler man out back. As muffler men often do, this one holds a few secrets and has a very interesting history. One thing I noticed right away was that he’s actually not an indian at all! Although International Fiberglass made indian versions of muffler men, Fort Cody happened to come across the service man model and turned him into an indian to meet their needs. Chuck told the story how in 1970 a gas station across the street was either going out a business or getting rid of some extra’s and had their muffler man taken down and was laying on the lot. Chuck’s dad walked across the street and a price of $100 was agreed on for the sale. Chuck remember’s helping haul the giant across the street and they set him up in the stockade in the back and painted him to look like an Indian. He has braids and a cloth around his waist (which is always blowing to the side) and has been repaired and repainted many times since that day in 1970. Interestingly this is one of the muffler men that the guys at Roadside America came across on their travels in the late 80’s or early 90’s and it was featured in their article in the Smithsonian. I’m not sure if the gas station that the M man came from was a phillips 66 but he is one of the rare bow tie wearing versions if you look closely at the indian paint at the top of his shirt. Fort Cody is proud of their muffler man and rightly so and he will continue to greet visitors for many years to come. Thanks to Brian Butko and his blog about the books he has written http://www.brianbutko.wordpress.com for sharing the picture of the Fort Cody Indian taken shortly after arriving at the fort. 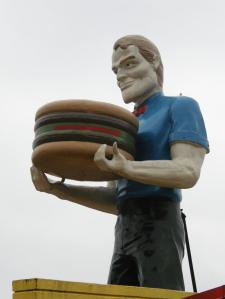 Muffler Men come in many different forms and verities although all are descendants of the original Bunyan and follow after the same mould. The more muffler men I see the more I discover and one interesting discovery was bow ties. Apparently international fiberglass either got some requests for bow tie versions or added it to their list of features but a handful of these versions still exist across the states and Mexico. They mostly exist on the standard service man model and so far there are seven of them that I know of. My #2 sighting was the first bow tie I saw in Zephyrhills Florida (formerly in Seven Points, TX as a Phillips 66 Cowboy)

They are also located in HancockMA, Kingsport TN, Piedra Negras Mexico, Los Angeles CA, Kittaning PA and one at Ft Cody in North Platte NB. The one at Fort Cody interestingly enough looks like an indian version of the muffler man but upon closer inspection it’s actually a service man model with a bow tie just dressed up as an indian. There may be more bow tie versions out there, if you know of any let me know! Special thanks to Amy Ryder for sharing her picture of the Kingsport Muffler man. 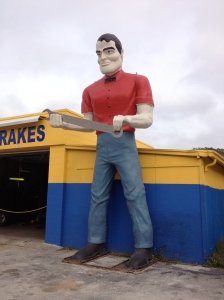 Visited this M man on 2-1-11 and back then he was in pretty rough shape with pealing pant. On a recent visit I found him in much better shape with a fresh paint job. Also talked to his owner Steve who owns four muffler men in the Tampa Bay area. Steve’s business Bigmechanic.com uses the muffler men for his companies mascot and even changed the name of his business to better match with the giants. The Zephyrhills M Man is one of the rare bow tie versions and was moved a few years back from Seven Points Texas. Steve keeps a close eye on roadsideamerica.com and other muffler men sites and is always on the lookout for other muffler men to put at his remaining auto shop locations. He came across the Seven Points muffler man while on a vacation in TX standing in someone’s front yard and looking run down. He was clearly an old Phillips 66 cowboy and after waiting a year for the owner to make up their mind if they were willing to sell Steve was able to go out and haul this giant to his Zephyrhills location. All of Steve’s muffler men hold a wrench he has made in his shops.