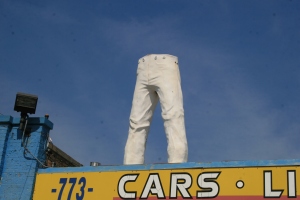 We’re happy to release Episode #7 after a long weekend of editing. This episode continues to follow us on our journey through Chicago. The first stop on this leg is at Ced’s Muffler and Brakes on Grand  Avenue.  This statue at Ced’s is known as a Mr Bendo.   There are a couple of other Mr. Bendos elsewhere in  the U.S.. We make an interesting discovery on the roof of the building using our GoPro camera. We also make a quick stop at the “Eye Care Indian” that has been on a Chicago rooftop for a very long time.  This episode wraps up with a quick preview of Episode #8.  You will see more of Bo and Neto in that video as we move on to some of the more famous Muffler Men and try to figure out their histories. Episode #8 will be the last in the Chicago series.  Episode #9 will cover our recent trip to Dodge City, KS to visit the Dennis Hopper Muffler Men.

This is a version of muffler men called Mr Bendo, I have yet to learn about where the name came from and why International Fiberglass started making them but there are a few across the country and they all look the same. They have the hand positions of the indian version and they typically have a red shirt, white pants and “Mr Bendo” written on their shirt. This one stands at Ralphs mufflers in Indianapolis and has since the late 60’s. Other versions of Mr Bendo stand in Sioux Falls, Wilson, NC as well as Chicago IL among other places.