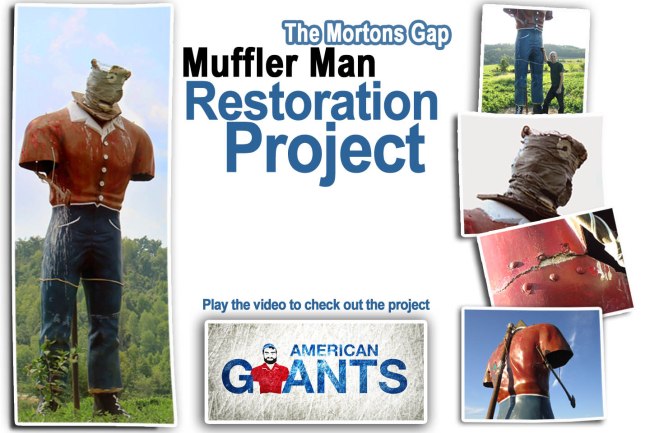 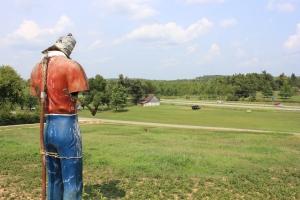 After months of planning we are super excited to announce the launch of a Kickstarter to help get a headless Muffler Man restored in Mortons Gap, KY. In 2011, I visited the Mortons Gap Muffler Man for the first time.  I had seen a photo of it on RoadsideAmerica.com.  This was early on in my documenting of these statues and I had not yet started my blog, usagiants.com.  The couple that 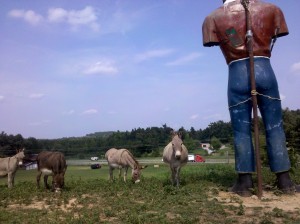 owned the statue told me the story behind it.  In 1995, they acquired the statue in Fort Campbell, KY.  It was already missing its arms and head at that point.  The statue had previously been installed at Pistol Pete’s Pawn Shop in Fort Campbell.  No one knows where it was located originally.  Today, it stands in the couple’s donkey pasture on a hillside overlooking Edward T Breathitt Pennyrile Parkway.  At some point, a handmade head was made for the statue and a normal-sized axe was hung from the statue’s arm socket. For more see the complete story here.

I have returned a few times after that to see the Muffler Man and visit with its owners.  They always asked where they could get arms and a head for the statue.  Since International Fiberglass went out of business in 1972, there are no spare parts anywhere.  However, a few people are making molds for replacement parts.  In the 1990s, Mark Cline made a mold of a 14 foot tall Muffler Man. 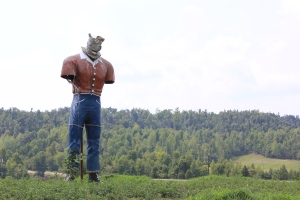 He has created a few other statues with it including a cowboy and a handful of soda jerks holding ice cream cones.  After explaining the situation to him, he agreed to recreate the parts and make a new axe for the Mortons Gap statue.  At that point I realized that the statue’s owners did not have the money to pay for the restoration – and neither did I! 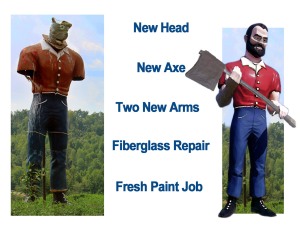 The money for this blog, the video episodes, and our travel expenses have all come from our own pockets.  We are now asking for your support for this special project.  If you have enjoyed this blog and our web episodes funding this Kickstarter is a great way to let us know! This project has also prompted us to finally produce American Giants t-shirts!  Right now, they are only available with your contributions.  Also one of the larger rewards is a real Muffler Man head! If you have ever wanted one of these this is your chance to get one. Of course, the greatest reward is knowing that you helped preserve one of these rare statues.