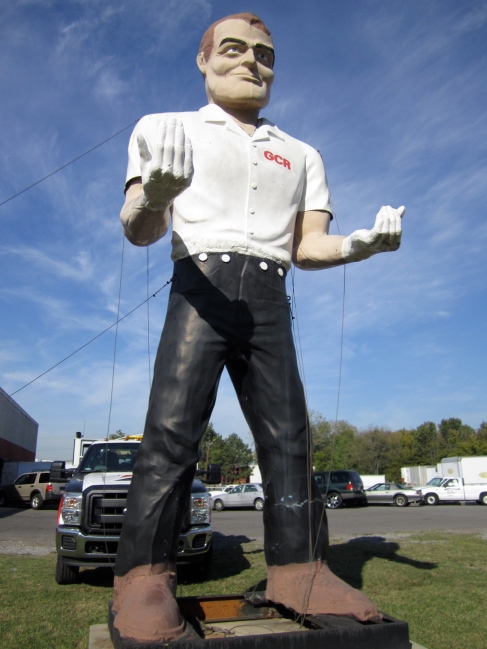 Stan the tire man has been a fixture in the Birmingham Alabama area for a long time and so far I haven’t got an exact fix on the year he showed up but I am guessing 60’s. Reports on http://www.roadsideamerica.com state that he used to stand at the corner of 3rd Avenue South and 24th Street at an auto repair shop back in the 70’s. About the time roadside america stated their muffler man spotting campaign all the early reports stated that he was along I-65 and complained that it was almost impossible to get a good shot of him while whizzing by at 60+ miles and hour. 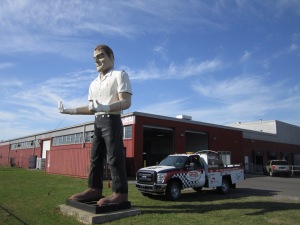 It seems that more then one mishap has befallen this guy and in 1998 there is a report on RA that he was downed in a storm and Jerry Griffies repaired him and got him back up (at that time he stood on a roof). In 2005 reports were coming in again of him being down once more so I think this guy has had some bad run ins with weather. It seems this second storm was involved in his relocation and all of a sudden reports were coming in of him at his current location on Vanderbilt Rd standing on the ground behind a fence at the GCR Tire Company. It also seems to me that his second repair job was a rough one and you can see clearly at his waist the rough patch job and his shoes look a mess. This guy is unique in that both of his hands are facing up, so somewhere along his path if not at International Fiberglass his hand was flipped so they both faced up to hold something. One report on RA mentioned that he used to hold a transmission back in the day. He also has his hands painted white like he has gloves on which I thought was a bit strange. I was not able to talk to anyone at GCR that knew anything about his history so I have borrowed from RA heavily on this one, you can read more at http://www.roadsideamerica.com/story/30701

All the photos at this blog are copyrighted by usagiants.com and may not be used for ANY purpose (blogs, websites, Facebook, Pinterest, etc.) with written permission from me. If you want to share a photo, you are welcome to include a link to my blog post where the photo appeared. However, do not download and upload ANY photos without my consent. In some cases, I have used photos in my posts from other people. If you want to use those photos for any purpose, you need to contact the photographer directly before doing so. Thanks!