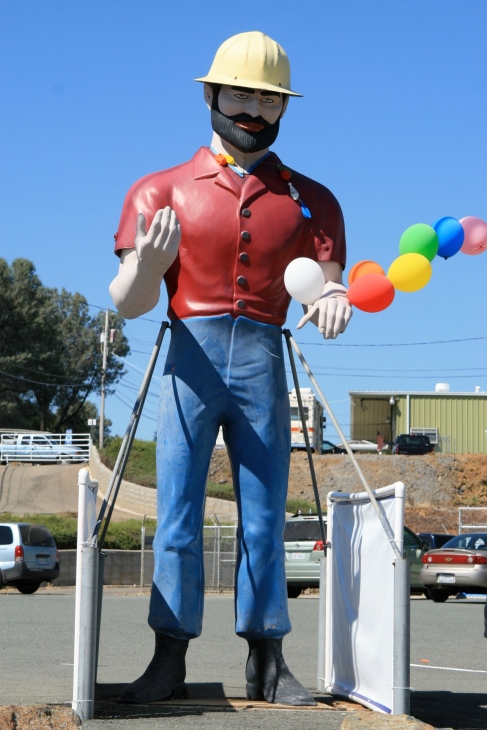 About the time I felt I had a pretty good grip on what was and what was not a muffler man I started seeing these guys. Yet another mystery in the history of the International Fiberglass muffler man saga. Roadside America when starting to document muffler men also started running into these guys. Although they look similar they are a totally different mould and size and when I first started to see them I questioned if they were muffler men at all. 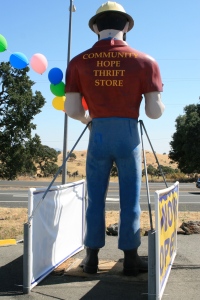 That question was put to rest on my #23 sighting in Sutter Creek, CA just north of Jackson. I had been working for the week in Sacramento and got some free time to take a drive out in the country to the east and see this guy.  Roadside America had not reported a sighting since 2005 so I wasn’t sure if he would still be there or not. I found him in good shape and holding some nice balloons to to announce the opening of the thrift store he stood at. He also bore the name of the store on the back of his shirt.This came as a bit of a surprise since for years the business had been a equipment rental store I believe. I still have yet to do my homework on this one and contact the owner. At the time I was there the owner was renting the building to the thrift store people and he allowed the M Man to stay. From my understanding this guy has been in the area since the 60’s and always has been with the same owner.

I have yet to find out if this mould was built by Bob Prewitt or International fiberglass but any doubt about him being a muffler man was put to rest when I noticed the “International Fiberglass” raised letters on his leg. It’s not the exact same logo that appear on the larger muffler men but IF all the same. 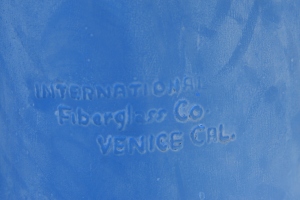 So for some reason IF started selling not just the standard 22 ft muffler men but these smaller versions as well that are actually a completely different mould. I have heard they are around 15ft high but have yet to measure one to be sure. They also really don’t have a name to separate them from their taller counterparts and both models are called muffler men. For the most part they are the same idea, a lumberjack holding an axe with most often a red shirt and blue pants with suspender buttons on the pants. However these shorter versions often have a hat that looks more like a jungle pith helmet then something Paul Bunyan would wear. They also came without a hat but if one is wearing a hat it is always this same hat. As with the other Bunyans the pant legs come to the top of the boots and the shoes are similar. These versions are more rare then the taller ones and although I have yet to do an official count I would guess there are only around 20 of these left standing today, perhaps less.

Interestingly International Fiberglass made another version of muffler man based on this mould and it is known today as a soda jerk. 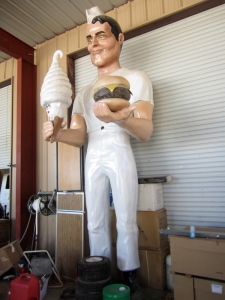 The original stood in Roanoke VA for years before being purchased by an artist named Mark Clien who runs Enchanted Castle Studios and builds and modifies hundreds of fiberglass animals and figures. Mark made a mould from the original soda jerk which held an ice cream and hamburger and today he occasionally sells them on e-bay. His copies can be found in OH, IL and CA. Hopefully in the future I can meet Mark and get the scoop on his soda jerk and also a muffler man head he has floating around his studio.