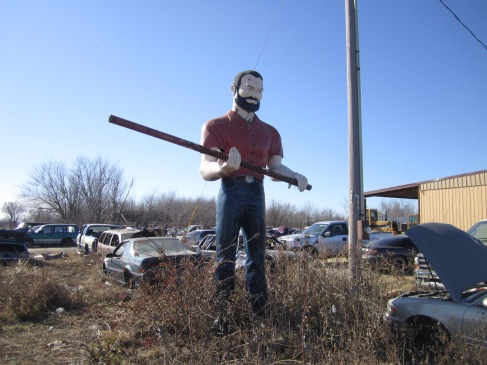 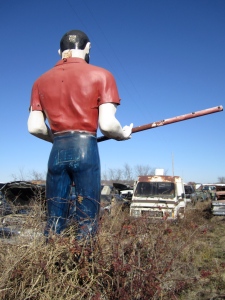 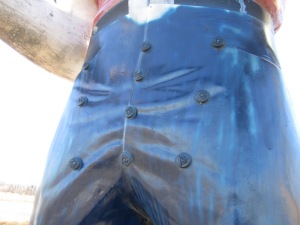 It’s always nice to see one of the shorter versions since they are far more rare then their larger cousins. I’ve got a chat with Steve Dashew (former owner of International Fiberglass) coming up and I will ask him about these smaller versions and the story behind them. They were cast from a completely different mold but didn’t sell as much as the larger muffler men. This one stands in a junk yard in the middle of no where in eastern Oklahoma at Cagle Salvage and Auto Crusher. He stands near highway 69 on Oktaha road between the tiny towns of Summit and Oktaha. It seems the collection of junk cars grows a bit each year around him but he does’t budge. There is a reason for that, when I inspected him closely I realized his owner has poured his legs full of concrete! So this guy isn’t going anywhere and probably weighs a ton, getting the prize for being the heaviest muffler man out there. His owner, who runs the place said that he picked him up from a closed business in Broken Arrow, OK around 1991 and brought him down on a truck and set him up in what was back then an empty front lot. Now 20 years later he is crowded by cars and has lost his original axe and holds a large steal pipe. From time to time I hear about muffler men being sold or moved but I have never been very concerned with that happening here.