As you may have noticed the blog has been silent for almost two weeks now and that is due to the second road trip for American Giants. Overall I made 15 new sightings and that brings me up to #97, obviously I have some catching up to do here on the blog. 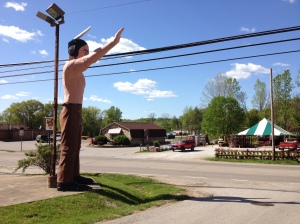 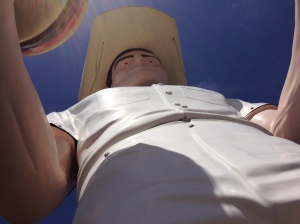 We started out in West Virginia with a visit to the Parkersburg Indian who stands at a car lot. I have a habit of showing up at places when they are closed and that was the case with Parkersburg. We got some good pictures and video anyhow and a call to the office will fill in the blanks. From there we headed up to PA and hit all 4 of the muffler men located on the western side of the state. I learned some interesting

history on the giants as well as some good news out of Greensburg, that their headless giant will soon no longer be headless. As roadside america puts it, “it’s always nice to see a muffler man re headed” Along with his freshly painted head the muffler man will be returned to his original colors for a classic bunyan. Next we hit the western side of New

York stoping in Irving for an update on

the Indians as well as visiting Mark Clien’s soda jerk nearby. In Syracuse we found the bunyan in Liverpool and unearthed some really interesting history on him. Like many muffler men he’s got some travel under his belt and even spent some time high above I-81 on a bill board for many years before settling down to where cars are mostly parked and not driving.

The next stop was a big one for me as I have always wanted to see the canadian headed muffler men and I was finally able to visit Mr Furnace in Ontario. We are still working on trying to find out the history for these guys (the other is located in Montreal) I believe they were made by international fiberglass because we have found post cards dating back to the 60’s of them. The trip started to wrap up with stops in Wisconsin to check out the restoration of the Wabeno muffler man and meet the man behind his restoration as well as some history on the Oshkosh bunyan.

Finally we visited two indians in Indiana, the one in Toto and also Brookston. The indians are both in great shape and we learned that the they both have migrated south from the Gary, IN area. It seems like the 70’s and 80’s was a migratory period for many muffler men and it is during these years that I have learned that many of them were sold and relocated. 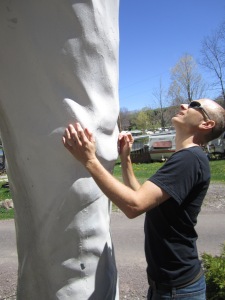 These days they tend to be

more permanent fixtures as owners are very reluctant to sell them. Allot more time was given on this trip to video production and interviews with owners and much of this trip will appear in the second season of American Giants with many more details then I have shared here. As always we met allot of new people and made some great finds! Season one is just weeks away and due to my heavy work load and this latest trip it has been pushed back a bit but we are still very close. Thanks for your patience!